State Dinner for the King and Queen of the Netherlands 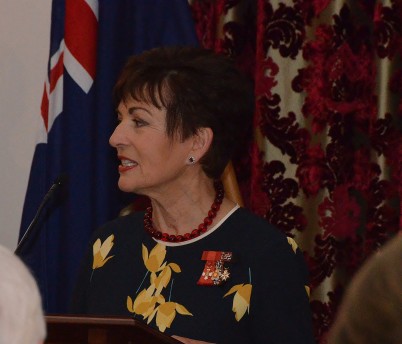 Your Majesties, it has been my great pleasure to welcome you to New Zealand today – on behalf of the Government and people of New Zealand – and to have you here, with your delegation, as our honoured guests tonight.

We hope that throughout your visit to New Zealand that you will experience our manaakitanga – our warmest hospitality.

It is fitting that our first guests to a state dinner hosted by my husband David and me should be for our esteemed guests from the Netherlands. The first European visitors to New Zealand came from the Netherlands, and your countryman Abel Tasman’s visit in 1642 is etched into our national history.

When Tasman sailed from Indonesia, and arrived at the top western corner of the South Island, he was confronted with the towering vista of the Southern Alps and described our country as “groot hooch verheven landt” (pron: growt hohg fur-hey-vin lunnt): a “large land, uplifted high”.

His crew celebrated the first ever Christmas dinner in New Zealand that year, 374 years ago.

Our connection with the Netherlands will always be foregrounded in the name given to our country, ‘New Zealand’. In return, the beautiful area adjoining where Tasman anchored is now named Abel Tasman National Park.

Dutch people have been a part of the story of New Zealand ever since. Sir Julius Vogel, of Dutch descent, was New Zealand Premier from 1873 to 1875.  He was famous for visionary investment in roads and railways, reconciliation with Māori and for bringing the first Bill before Parliament to allow women to vote.

After the Second World War, the Dutch community here was boosted by an influx of immigrants. At first, they were mostly men, under 25 years old, from the Randstad area. I am told that the women on the famous “Bride Flight” in 1953 have since been the subject of a rather romantic Dutch movie.

Life was hard in the Netherlands during and after the war. But settling into a new life on the other side of the world, far from family and familiar culture, must have been very difficult too.

Dutch migrants were described by one official as “a fine type, of athletic build and well educated”.   They soon established a reputation as hard workers – in fact, some even attracted criticism for working too hard and were told to slow down in the workplace!

Dutch communities made New Zealand their home – but did not forget their roots. They contributed to the multiculturalism which is such an important feature of our culture and identity today.

Tonight, we celebrate their contribution and the history of New Zealand’s relationship with the Kingdom of the Netherlands.

Your country remains as a crucial entry point for our exports, which arrive in the port of Rotterdam to be trucked throughout the continent.

The Netherlands is often our first port of call as we seek to understand and respond to what is happening in Europe, thanks to your readiness to speak freely and frankly to us, and your superlative English language ability.

The Netherlands and New Zealand share a belief in open markets and trade as generators of growth and jobs. We both look to build economies based on technology and innovation.

Nowhere is this more evident than in our shared commitment to high quality agriculture and horticulture, as we seek to grow safe, nutritious food for a hungry world, and to do so in a way that is sustainable for our environment and our climate.

We share the same values across the broad range of foreign policy and international security challenges before us. We are passionately committed to democracy, the rule of law and human rights.

We share a strong interest in addressing the challenges facing small island developing states. Given we both have special constitutional relationships with island countries within our realms, we share a concern about how global trends affect these countries and their peoples.

We find ourselves to be likeminded in all the international fora; indeed New Zealand diplomats tell me how lovely it is to sit next to each other at UN conferences, thanks to the alphabetical seating order. We couldn’t ask for better neighbours.

Our cultural links continue to grow, and they often seem to reflect the sea-faring nature of our earliest encounters.

For example, a traditional Māori war canoe called “Te Hono ki Aotearoa” is currently in the care of the Volkenkunde Museum in Leiden. It has its own Dutch crew, especially trained by Māori in all aspects of waka protocol. The crew even have their own haka, which I’m told is thrilling to watch.

When I think of our two countries, I am reminded of the Māori proverb “He waka eke noa” - “We are all together, in the same canoe.” Our two countries are working together for a more prosperous and safer world.

Your Majesties, we are deeply honoured that you have travelled to the other side of the world to visit us.

We celebrate our shared values. We seek to strengthen our shared interests. And we look forward with pleasure to the next 374 years of creating and maintaining the links between our two countries and peoples.