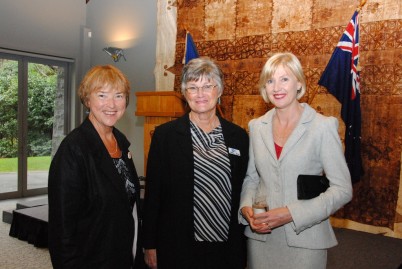 It is a great pleasure for Janine and me to welcome you all to Government House for this reception for the Northern Region Stroke Foundation.

In mulling over what I might say this evening, I was pretty clear what I didn’t want to talk about, namely things you already know.  You all know, often from a personal perspective, what a pressing health issue stroke is for New Zealand and you don’t need your Patron to remind you of those facts and figures.

What I did want to talk about was the focus of this reception – volunteering and the contribution volunteers have made to the work of the Foundation.

That proverb resonates strongly for me.  I used it in the speech I made when I was sworn in as Governor-General on 31 August 2011 and again in my first New Year message.  To me it underscores the importance of placing the needs of people at the centre of an organisation and how it operates and what it does.  While this may seem patently obvious, we can all think of instances of organisations that have come unstuck simply because they were not focused on the people they were meant to serve.  And we can all think of policies that were created without involving the people they were meant to assist.

Volunteering is at the heart of the Stroke Foundation and the services it provides.  The dedicated and hardworking paid staff, and field officers, would struggle to accomplish a fraction of what they do if it wasn’t for the work of the volunteers who assist and support them.

Some of those volunteers are stroke survivors.  Others are the partners and friends of people living with a stroke, and some are people who just want to help.  The roles they perform vary from governance at the higher levels of the organisation, to undertaking fundraising duties, to providing one-on-one support, to helping out by serving morning tea at a local Stroke Club meeting.  Without doubt, all of those roles are invaluable to the success of the Foundation.

Earlier this year, I provided the foreword to the latest edition of the Foundation’s excellent resource for stroke survivors, entitled Life after Stroke.  There was a wonderful comment from a doctor who had suffered a stroke.  His words spoke of how the Foundation and its stroke clubs give many stroke survivors a renewed sense of hope, and also of the value of volunteering to the community and in improving self-worth.  He said:

“After 30 years as a GP and on the staff of a large private hospital, I couldn’t accept that I was a patient.  For two years, I refused to have anything to do with the local Stroke Centre, saying I didn’t need it.  Then my wife suggested they might need me!  I became involved, and later was invited to speak to medical students about my stroke.  This led to years of satisfying work as a lecturer and guest speaker.”

Volunteering is the glue that holds the Foundation together and your work helps give new hope to stroke survivors and those who love and care for them.  As Patron of the Stroke Foundation of New Zealand, I want to recognise, acknowledge and congratulate all of its volunteers for their contribution and convey to you our appreciation for the amazing job you are doing.

In the words of the renowned humanitarian Mahatma Gandhi:  “Man becomes great exactly in the degree in which he works for the welfare of his fellow-men.”  Thank you again.

I would know like to invite President Stewart Germann to address us.