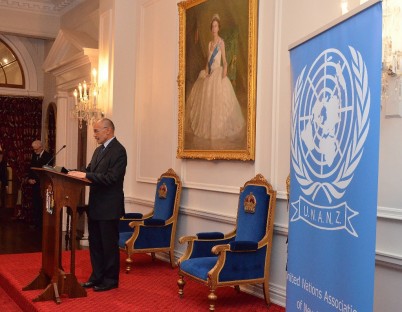 It is a great pleasure for me to welcome you to Government House today for this reception to mark the 70th anniversary of founding of the United Nations and United Nations Association of New Zealand.

Much of the external perception of our nationhood – our reputation, our international relationships, our commitment to be a responsible global citizen - has been played out, for the last 70 years, in, with and through the United Nations.

In 1945, as our servicemen and women were returning in their thousands from six long and weary years of war Peter Fraser, who had been a notable conscientious objector in the First World War – and yet a very effective wartime Prime Minister during the Second World War – helped to shepherd a new organisation with lofty and ambitious goals – the United Nations.  Like 50 other nations, New Zealand would become one of its founding member-nations.

Since then, we have played our part at the United Nations, and in its agencies, to further international peace and cooperation.  Our membership of the United Nations has enabled us to develop multilateral relations with countries that we may not necessarily have had diplomatic ties with.  And like many of the nations represented here today, we’ve contributed our people to all corners of the globe in support of United Nations’ initiatives.

Like many other nations, we have advocated for change and reform at the UN.  We have sought and supported consensus and challenged the UN to do the right things.

Currently, New Zealand is in the fortunate position to be able to bring influence in the UN as a non-permanent member of the Security Council.  Our current two-year role on the Security Council comes in a period of tension and challenges.  We live in an increasingly volatile international environment with complex security threats; a time of heightened concerns over the impact of climate change and environmental degradation, especially for small island states; continuing inequalities in the circumstances of humanity and huge numbers of disenfranchised and displaced people.

These issues affect us all – they truly are international problems.  The former Secretary-General Kofi Annan captured our collectiveness on this planet when he said: “More than ever before in human history, we share a common destiny.  We can master it only if we face it together.  And that is why we have the United Nations.”

There is no equivalent international body with the capacity, indeed the mandate, to take on the weight of this enormous responsibility.  So in its eighth decade, I am sure we all share a hope that the member states of the United Nations can find new ways to work together to implement collective solutions – and to bring about workable and sustainable change.

The progress made in the Millennium Development Goals, in areas such as the reduction of extreme poverty, gender parity in primary education, and maternal mortality; and improving access to drinking water show that global initiatives can have an impact.

Unfortunately, the results have not been positive across the board.  Millions of people remain left behind.  Hence there is a new determination by the UN to tackle the root causes of inequities and ensure sustainable practices through 19 new Sustainable Development Goals.

The Sustainable Development Goals are ambitious and costly.  But we cannot afford the cost of not addressing the big global issues around food, water and energy security; sustainable agriculture; access to education and gender equality; employment and sustainable economic growth; the lack of infrastructure; negative climate change and ocean and land degradation; and access to justice.

As a sign of the times the UN turned to social media to get worldwide input into the new Sustainable Development Goals.  Social media will no doubt play a part in mobilising support for their implementation including the financial measures agreed to in the Addis Ababa Action Plan.

Commitment from all nations is required if the new development goals are to be achieved.  No doubt UNANZ will play a role in creating greater awareness of these goals within New Zealand.  Equally, the UNANZ can continue as the people’s movement for the United Nations in New Zealand promoting the engagement of the UN.

Congratulations to everyone associated with UNANZ for reaching this 70th anniversary milestone.  I wish you every success with your contribution to the United Nations commitment to humanitarian action to make a better world for us all.