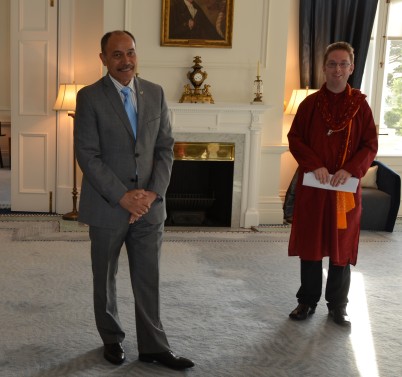 Distinguished guests warm greetings to you all, and welcome to Government House Wellington.

It is my great pleasure to welcome you all to Government House to celebrate – albeit a few days early - United Nations Day.

Tonight, we can celebrate the fact that my generation, unlike the two before me, have not had to serve our country in major world wars.  We can be thankful for the contribution the United Nations has made to the achievement of that outcome.

For those who might question the UN’s continued relevance, one need only look at the challenges that confront us, which cross national borders and demand a global response.  The UN clearly provides the best opportunities to pursue multilateral solutions to complex, transnational, global issues.

Today is an opportunity to reflect on New Zealand’s contribution to the United Nations, from our days as a founding member, when we contributed towards the writing of the UN Charter, and the key values promoted by this country: fairness, inclusion, independence, collaboration, compassion and integrity.

Many New Zealanders have given distinguished service to the UN, in the maintenance of peace, security and good around the globe.  We have done that as peacekeepers, as diplomats, and in the delivery of a broad range of UN programmes.

Our contributions in peace-keeping have enhanced perceptions of us as a committed global citizen.  Our defence and police personnel have served the interests of international peace and security by responding to crises, supporting political transitions and helping to support fragile states.

I am honoured to have worked for the UN in peace-keeping in Southern Lebanon, during its 50th Anniversary year.  In May, I visited the United Nations, and met with Secretary-General Ban Ki-moon.  I took the opportunity to meet permanent representatives of 25 countries that contribute to United Nations Peacekeeping Missions.  I also delivered New Zealand’s position statement at the Permanent Forum on Indigenous Issues.

New Zealanders will continue to play their part in UN endeavours.  Our most senior New Zealander at the UN, Helen Clark has exercised tremendous influence through her role as Administrator of the UN Development Programme.

As the world’s security, economic, social and humanitarian issues become more complex, as we are confronted with new challenges, New Zealand‘s role and contributions will need to adapt to meet them.  However, as things change, we need to hold fast to the Principles that underpin the UN, and our own actions.

It is 20 years since a regrettable failure of the UN peace resolution processes which resulted in genocide in Rwanda.  New Zealand’s connection was our Permanent Representative at the UN, Colin Keating, who later was a Board member of UNANZ.

In 1994, Keating, as President of the Security Council, tried in vain to get support from its permanent members for a strengthened peace-keeping force in Rwanda.  One million Rwandans subsequently lost their lives.

It’s small comfort to be on the right side of history.  However, Keating’s efforts have not been forgotten.  In 2010, he was awarded Rwanda’s Campaign against Genocide Medal for his efforts to recognise and stem the violence, and Rwanda’s permanent representative to the United Nations conveyed his appreciation to me this year.  It is a testament to Ambassador Keating’s character that he apologised for the failure of the Security Council to act in time in 1994, when he addressed the UN earlier this year.

It is all too easy to focus on failures like Rwanda.  It is important to not overlook instances where the UN has made a positive impact – in places like Sierra Leone, Burundi, Timor-Leste, Haiti and Kosovo.

It is also important that we acknowledge and celebrate the many other areas where the UN makes a positive difference.  The UN’s Millenial Goals align with a theme I have chosen as a focus of my work for my five-year term.  Our rangatahi –aligns well with improving educational, social and health outcomes, particularly for women and children.  Advocating for, and supporting, young people is the right path to take for more prosperous and stable communities in New Zealand and around the globe.

As 2015 approaches and the Millenium Goals come up for renewal, no doubt UNANZ members will be considering what the next challenges should be.  It was interesting to see the UN is casting its net widely to gauge opinion around the world.  This includes the ‘vote my world 2015’ webpage which allows individuals from anywhere on the globe to have their say.

What next for New Zealand in the United Nations?  Our bid for a non-permanent seat on the Security Council has reflected on the last time we were on the Council, 20 years ago.  Then, New Zealand confirmed its reputation for standing up for principle, while showing a willingness to develop partnerships and build bridges between opposing camps.  I consider that to be an expectation of the 145 member states that gave us their vote last Friday morning, at 3.20 am New Zealand time.

This evening, we can celebrate a wonderful result to a ten-year campaign by New Zealand governments, supported by politicians across the divide, and our very capable diplomatic service.

New Zealand now has an opportunity to influence the UN’s responses to a range of security issues.  I am sure you will join me in wishing our Permanent Representative, Hon Jim McLay, the very best as he takes on this crucial and significant responsibility.

The UN speaks to our connectedness in our contemporary world.  When we reflect on its efficacy, I would observe that the UN has mana.  Its mana has been bestowed by the deeds and ideals imparted in its founding.  Its mana has been earned by each and every event and individual associated with it.  And, the UN’s status has added to the mana of individuals and events acting in its name.  The UN is the preeminent multi-lateral organisation for peace, security and good.  And those who work for it are decent.  I close by saluting you all for your association with the United Nations.