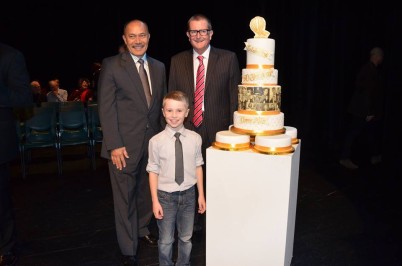 Thank you for inviting me to join you in celebrating Upper Hutt city’s golden anniversary.

This is not the first time a Governor-General has been involved in the celebration of Upper Hutt city’s status.  Indeed, one of the 50 Upper Hutt heroes is my predecessor Sir David Beattie – I would like to acknowledge Lady Norma Beattie who is with us tonight.

It was my predecessor, Sir Bernard Fergusson, who officiated and read the proclamation of Upper Hutt’s new city status at Maidstone Park on 28 May, 1966.  The event was surrounded by a flurry of activity, not least of which was the 1000 pigeons released following Fergusson’s reading of the proclamation.

The event was the culmination of a gala week for Upper Hutt.  The commemorative booklet published for the occasion lists historical displays, float parades, a hangi, fashion contests, puppet shows and afternoon teas as part of the celebrations.  The entire Upper Hutt community came together - from the workers at the Dunlop Tyre Factory to the ladies of the Women’s Division of Federated Farmers to the members of the local Boys and Girls Brigade.

Photos of the celebrations taken by Hutt photographer Revelle Jackson, another one of the Upper Hutt Heroes being honoured tonight, give us some idea of what it was like to be there.  Sir Bernard Fergusson, in full military uniform, is shown reading the proclamation.  We see the people gathered in Maidstone Park, young and old - from babies in prams through to the elderly - and we see the enjoyment they were getting from being a part of the day.

It was no doubt a moment of great pride that Upper Hutt, the place they lived in, was now designated a city.  It’s also likely that some were thinking about the Upper Hutt of the future, and wondering what was in store.

Fifty years on, we can see that future around us.  While Upper Hutt has seen many changes, it has retained its character, its identity and a strong sense of community.

The list of Upper Hutt Heroes is an eclectic Kiwi mix - of sportspeople, politicians, businesspeople, musicians, artists, community identities – the likes of Earle Kirton and Selwyn Toogood – Miska the police dog - and stuff – the 4 cylinder Holden Commodore SLX sedan.  The group of 50 represents a heritage that any city in New Zealand would be proud to lay claim to.  It underscores the idea that big things can come out of little places.

The people on the list give us inspiration and an example to aspire to.  The Upper Hutt Heroes have made a difference, some internationally, many nationally and all in this community.  There’s a hero for everyone because everyone has a part to play in making our cities great places, where people can live great lives.  Considering the wealth of experience and inspiration represented in the 50 Heroes, it will be interesting to see who and what will join them on the wall should the initiative be repeated for the city’s centenary.

Congratulations to Upper Hutt on 50 years of city life. I wish you all the very best for what’s to come.