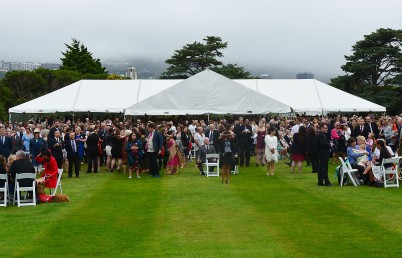 Greetings to you my guests.

Greetings to us all on Waitangi Day

I greet you acknowledging the Treaty of Waitangi and its covenant

Welcome to all our guests today – to members of the Diplomatic Corps, to our new citizens, and to the people who entered the ballot to share our National Day at Government House.

Today, all around New Zealand, people are marking Waitangi Day in their own way.

For many, it will be an opportunity to spend time with family and friends.

If I were to ask them what Te Tiriti o Waitangi/the Treaty of Waitangi means to them, there would be a mixed response – ranging from an instrument of colonisation – or a musty 19th century relic – to a solemn pact between two peoples about how they were to live together in the future.

Yesterday, I thought about those perceptions as I stood on the lawn at Waitangi, where the Treaty was first signed.

I imagined the scene 177 years ago, with flags flying and hundreds of iwi leaders gathered, and the bay filled with waka and ships.

Today is an opportunity to reflect on how that scene came about – and what was promised in our nation’s founding document.

In the early 19th century, Europeans started coming to Aotearoa New Zealand in increasing numbers. Most of them were British.

Māori valued the opportunities for trade and access to new products and technologies, but if and when things went wrong – and they did – there was no avenue for redress.

The British Government was not enthusiastic about taking on another far-flung colony and sought advice from the British Resident, James Busby, and Captain William Hobson. Hobson recommended establishing several British settlements and James Busby recommended that New Zealand become akin to a British protectorate.

However, Edward Gibbon Wakefield’s plans for large-scale colonization forced the British Government’s hand. Wakefield intended to establish a settlement in Wellington, and to set up a government.

Regulating this colonization was seen by the British Government as the only way to acknowledge the rights of Māori, as the indigenous inhabitants of the country.

The Treaty document drafted for signature on 6 February 1840 set out to provide for a settler New Zealand where Māori would have a special, protected position.

It was prepared in haste, by Hobson, who had been sent to New Zealand as a Consul but also as potential Lieutenant-Governor, should New Zealand become a colony. He was assisted by James Busby and missionaries, and Reverend Henry Williams translated the text into Māori.

The English and Māori versions seemed to promise different things.

In the English version, Māori ceded sovereignty, whereas in the Māori version, they accepted governorship – kawanatanga.

Both versions affirmed Māori possession of their lands, and British settlement where Māori were prepared to sell their land to the Crown.

The British government undertook to maintain peace and order and protect Māori interests. Māori would have the rights of British subjects.

Over 40 chiefs signed the Treaty on 6 February 1840. Lieutenant Governor Hobson knew that the agreement of other iwi would need to be sought. Copies of the Treaty were then taken to other parts of New Zealand, from Kaitaia to Ruapuke – Stewart Island.

Not all regions were visited, so not every iwi had the opportunity to sign.

In all, about 540 iwi leaders gave their agreement, including a number of women.

Those who refused to sign did not want to give up their independence – or have it compromised – or could see no benefits in the Treaty.

Those that signed had various reasons for doing so. Māori were already proficient traders and welcomed further opportunities to extend and protect that trade. They wanted to see European settlement controlled. They wanted legal protection from unruly British traders and settlers, and further access to European skills and technology. They were wary of French colonization, remembering the deaths of around 250 people in retaliation for the killing of French navigator Marion du Fresne and 24 of his crew in 1772.

For some Māori, the Treaty was seen as a sacred covenant between Māori and Queen Victoria.

Above all, the Treaty seemed to offer a new relationship with Britain where authority would be shared, where chiefly authority over tribal lands and resources would be protected.

Within a year, his optimism had vanished – and he now thought that the substance of the land had gone to the Queen – and that Māori retained only the shadow.

Chiefs were often persuaded to part with land for low prices, in exchange for the promise of schools, hospitals and land reserves – but found that there was no way to ensure that such promises were kept. Meanwhile, they saw their land on-sold at a profit.

There is debate about the size of the Māori population at the signing of the Treaty. It was probably between 100,000 and 200,000. The European population was estimated to be around 2000. Within 20 years the trickle of British colonists had turned into a steady stream, new diseases had taken their toll on Māori, and the populations were roughly the same, at around 60,000.

The colonists came here to make a new future for themselves and their families. They wanted land, and many were impatient or ignorant of the Treaty, which they saw as an impediment to the march of progress.

Successive governments supported their demands and were quick to dismiss the Treaty. The Governors of the day were often caught in the middle – as representatives of the Crown – between Māori and settler interests.

In 1840, Māori could not have imagined the scale of colonization that was to come. They protested against breaches of the treaty – to no avail – and their resistance culminated in armed conflict.

Ultimately, they could not withstand the might of British and colonial military forces or to prevent the passing of legislation which enabled their lands to be taken away from them. The results were devastating and long-lasting.

At the time of signing, the Treaty was unique in that it led to the creation of a new sovereign nation – but its legal status was obscure.

Despite this, the Treaty has endured as a living document and a vital part of our constitutional framework.

It is central to our history – and we live with that history. Every community in New Zealand is the way it is today because of that document, and the aftermath of those signings 177 years ago today.

For many years, New Zealand history was not part of the school curriculum, so few Pakeha had any idea what was promised in 1840, or knew about the systematic denial of those promises over time.

I have been fortunate to witness a shift in those perceptions during my lifetime – and privileged to become involved in the Treaty Settlement process as a negotiator for the Crown.

Through learning the history of iwi in the Bay of Plenty, I gained a new insight into the impact of the Treaty and its aftermath.

I learned, for example, how the land which is now Tauranga city was confiscated as punishment following the Battle of Pukehinahina/Gate Pa, and how nearby Māori settlements were razed to the ground by a ‘scorched earth’ policy.

My experience as a Crown negotiator confirmed for me that confronting our past is the only way to understand how we should behave in the present.

This is why the Treaty Settlement process, embraced by successive governments since 1975, has been so important, and enables us to have confidence in a better future.

On this day, Waitangi Day, we can reflect on what this country stands for. Our Treaty asked of us that we act in good faith, and value others’ rights and respect difference.

These are qualities to value and affirm – today and into the future.

And so, here is the time of Waitangi and its important attributes.

Greetings to us all.