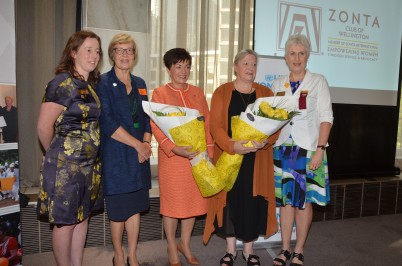 Ladies and Gentlemen, distinguished guests - a very good morning to you all.

My thanks to Zonta International and the UN Women National Committee Aotearoa New Zealand for giving me this opportunity to speak today. It is a great pleasure to be here and to join you in celebrating International Women’s Day 2017.

All around New Zealand and indeed around the world, people will be gathering together to recognise the social, cultural and political achievements of women.

It’s a day to celebrate how far we’ve come. It’s also a day of reflection about where to go next and what else needs to be done.

The day has attained great significance since the earliest recorded event in the USA in 1909. It’s celebrated in different forms all around the world - and in 28 countries International Women’s Day is an official holiday! Not in New Zealand though. I’m afraid it’s business as usual, once breakfast is over.

It’s appropriate, with the mention of work, to introduce the theme chosen by the United Nations for International Women’s Day - Women in the Changing World of Work: Planet 50:50 by 2030. Gender equality in the workplace stimulates economic growth and the flow-on effect enriches and empowers all members of our communities.

New Zealand was a trailblazer in women's rights with the introduction of universal suffrage in 1893, paving the way for universal participation in politics, education and business.

In 2016, we were one of the 10 highest ranked countries in the Global Gender Gap Index . The index, which is put together by the World Economic Forum, measures success in closing the gender gap in terms of economic participation, educational attainment, political empowerment and health and survival. Our 9th place last year puts us significantly ahead of the UK, USA, Australia and Canada in terms of gender equality.

We have worked to close the gender gap, recognising the principles of democracy and human rights that should govern the participation of everyone in society.

The legacy of the suffrage movement of the 19th century and the women’s movement of the 20th century has been the opportunity and the freedom for women to participate in every sphere of New Zealand life – from education, to work, to sport and politics. These rights are embedded in our legal system and in our culture.

Our past is something to be proud of but there are still challenges to be addressed. Exactly 45 years ago I was a first year law student at Victoria University when I heard and was inspired by Germaine Greer who famously celebrated International Women's Day here in 1972. She was charged and convicted for using indecent and obscene language in that address, but that was merely incidental to her call to arms - for all women to join a revolutionary movement. She brought women's liberation to the centre stage in New Zealand.

It was an exciting time to be a young woman at university. We were demanding the same rights and opportunities as those enjoyed by men, and the mantra was “Girls can do anything”. I felt confident that we were on the cusp of change to a truly egalitarian society.

Yet despite our best efforts, here we are, 45 years later, and conscious and unconscious bias still affects the status of women in our community.

Women’s participation in the workforce is more likely to be affected by the need to care for children or elderly relatives. Discrimination also exists where jobs are thought of as being women’s work or men’s work.

An area of considerable interest to me is the gender pay gap. In 2016 I chaired the Joint Working group on Pay Equity and through that process I came to understand more clearly the challenges faced by workers in female dominated workforces such as early childhood education, aged care workers and social workers.

Although work has been done to address the gender pay gap, including increasing the education and skill level of New Zealand women so that women are on average more highly qualified than men, an unacceptable differential remains. The new research released by the Minister for Women yesterday reveals more about the behaviour, attitudes and assumptions that adversely affect women in the workplace. It’s an issue that needs to be better understood, given the impact it has on the financial wellbeing of all our communities.

Changing attitudes takes time but we have seen that it can be done. In the past, legislation played a major role in getting us to where we are now.  Innovation may be the key to helping us find our way forward. Social and employment settings can promote gender equality.  The organisation and structure of our workplaces can help it happen.

We should not ignore the importance of female role models. I note with some astonishment that women leaders in business are still in the minority by some significant margin. There is currently only one female CEO of a New Zealand Top 50 company and while the state sector has a stronger record of supporting women in leadership roles, in the private sector women make up only 17% of board members and hold only 20% of senior management roles. Even Australia has better participation results, with 25% of private sector corporate governance roles now held by female directors. That's a reversal of the relative positions twenty years ago.

Our boards, institutions and organisations are facing calls to do a better job of reflecting the gender diversity of the population. This is more than a human rights issue – it makes good business sense. Gender balance results in better decision-making, organisational resilience and economic and productivity gains. It's hard to fathom what the counter factual might be.

In 1792, writer and philosopher Mary Wollstonecroft said, “Women ought to have representatives, instead of being arbitrarily governed without any direct share allowed them in the deliberations of government.” She’d be delighted to see that today there are seats at the table for us – now we need to use them. The more visible women are at all levels, the more normal a gender-equal society becomes. We need to work with, support and mentor each other to ensure this happens.

Planet 50:50 by 2030 is an admirable goal and in Aotearoa New Zealand, at least, we have a real chance of achieving this. We have the freedom to work and are not prevented from doing so by law, religious decree or social pressure.

At the same time, we need to remember that women in other parts of the world do not have the same freedom. By continuing our quest for gender equality here, we act as role models and send the message that ‘close enough’ should not be considered the finish line.