Guidance for the public during the period of national mourning

There is no expectation for organisations or individuals to mourn in a particular way. Below are some suggestions for how New Zealanders may wish to show their respect for the late Queen.

A period of national mourning started immediately after the announcement of the Her Majesty Queen Elizabeth II’s death on 9 September 2022. It will continue until the end of Monday 26 September, the day the New Zealand Memorial Service.

Government and other services will continue as normal during this time, except for Queen Elizabeth II Memorial Day on 26 September. Businesses are not expected to close during the mourning period.

There is no expectation for community groups, sports teams or businesses to cancel or postpone events scheduled during the mourning period.

If an event is scheduled during the period of mourning, organisers may wish to consider including a mark of respect. If appropriate, the event could feature a karakia, a minute’s silence, the national anthem or a portrait of the Queen.

Members of the public may wish to leave flowers and cards in memory of the Queen. In Wellington, these can be left on the lawn in front of Parliament or at Pukeahu National War Memorial Park.

Please do not wrap flowers in plastic, or leave non-floral items such as candles or soft toys.

Communities in other areas may also arrange for places to leave flowers. Please check with your local council for more information.

In Wellington, people can leave messages in condolence books at Parliament, at the National Library and the Wellington Cathedral of St Paul until the end of the day of the New Zealand Memorial Service (26 September).

Please check with your local council for more information on condolence books in your area.

New Zealanders wishing to pay their respects online can send a condolence message by email to condolences@dia.govt.nz.

An online Book of Condolence is also available at the Royal Family's website.

People wishing to send a message of condolence to the new King can write to: His Majesty The King, Buckingham Palace, London SW1A 1AA, United Kingdom.

A national minute of silence will occur at 2pm on Monday 26 September, coinciding with the beginning of the State Memorial Service. It offers a way for people, wherever they might be in Aotearoa New Zealand, to collectively pause and acknowledge the passing of the Queen and her extraordinary 70 years of service.

The New Zealand flag will be flown at half-mast on government buildings until the end of the day of the New Zealand Memorial Service (26 September). The only exception is on the day that the new King is proclaimed in New Zealand. On Proclamation Day, the flag should be flown from the top of the mast for the entire day.

Businesses or other organisations wishing to pay their respects by half-masting flags are welcome to follow this guidance.

The flag is half-masted by raising it to the top of the mast, then slowly lowering it to the half-mast position. This position will depend on the size of the flag and the length of the flagpole.

The flag should be raised again to the peak before lowering it for the day.

Visit the Ministry for Culture and Heritage's website for information on half-masting the New Zealand flag.

Gun salutes will take place during the period of national mourning.

A gun salute was fired from the Te Papa Promenade in Wellington at 6pm on Friday 9 September 2022, by personnel from the 16th Field Regiment, Royal New Zealand Artillery, based at Linton Military Camp.

The Death Gun Salute of 96 rounds was fired at 10 second intervals. The salute was 16 minutes in duration and live streamed on the NZDF Facebook page. 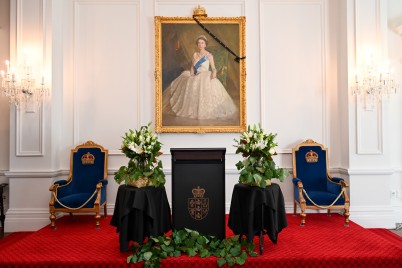 There is no requirement to remove or replace official photographs of Queen Elizabeth II that are on display. Organisations wanting to acknowledge the Queen’s death may wish to place kawakawa leaves on the ground underneath the photograph, and/or place a black ribbon across one corner of the frame.

Official portraits of the new King of New Zealand will be available on this website at a later date.

There is no expectation for people to wear black armbands during the mourning period.