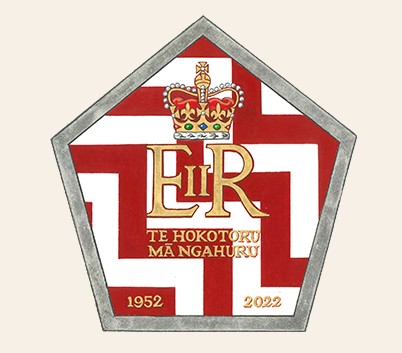 The emblem, approved by The Queen, was prepared by Phillip O’Shea, CNZM, CVO, New Zealand Herald of Arms. He also designed the three New Zealand Orders and The Queen’s Diamond Jubilee Emblem for New Zealand.

Within a frosted silver (platinum) five-sided frame the Royal Cypher composed of the letters and Roman numeral, E II R (in gold) surmounted by a Royal Crown [St Edward’s Crown] in proper colours, with below the inscription in Times Roman:

(The traditional Māori word for 20 is hoko, and 20 was a key number for counting – so this is ‘three twenties plus ten’ rather than ‘seven tens’.)

In the base the dates 1952 and 2022 in gold, placed on the Poutama step design in the traditional colours of red-ochre and white.

The shape is based on the frame of the official and traditional British Hallmark for Platinum which is a five-sided frame within the centre of which is a jewelled Orb surmounted by a cross.

The top portion of the frame may allude to the shape of barge boards of a Māori meeting house or whare rūnanga.  It may also allude to the body of the Gold State Coach built in 1762 and used at Coronations and Jubilees of the Sovereigns.

The Poutama design represents ‘steps of service’ or in this instance the 70 years of public service by The Queen.  The design is often found in the tukutuku lattice panels in Māori meeting houses and woven in several colours.  The ribbon of The Queen’s Service Order is based on the poutama design.  The QSO, instituted on Commonwealth Day 1975, was named to commemorate the fact that The Queen is the first ‘Queen of New Zealand’. The design also appears on the reverse of the New Zealand Public Service Medal instituted in 2018.

The Royal Cypher is the personal emblem of The Queen.  The Royal Crown (St Edward’s Crown) also appears in the New Zealand Coat of Arms and represents the fact that The Queen is our Head of State.

Gold, Silver and Platinum have been regarded as the noble or perfect metals.
Red ochre (kōkōwai) is a powerful spiritual colour.
Red may symbolise fortitude, toil and hard work.
Gold may denote faith, prudence, wisdom and constancy.

The emblem, in colour may be downloaded here.

Use of the Emblem

It is intended that the emblem be used widely by individuals, organisations, companies and charities for celebrations to mark Her Majesty The Queen’s Platinum Jubilee in 2022. This includes use for commercial purposes and advertising. The normal rules for the use of images of The Queen still apply.

The emblem should not be redrawn or re-constituted.

In addition to printed items, the emblem may be applied to any item relevant to the celebrations (for example, flags, banners, teacups and souvenirs, badges, items of clothing and all textiles).