New Envoys to present their credentials in Wellington 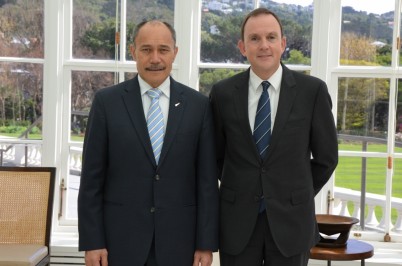 The High Commissioner for India, His Excellency Mr Sanjiv Kohli is a career diplomat who joined the Indian Foreign Service in 1988. He has held postings in Kuwait, Moscow and Doha. Mr Kohli is based in Wellington.

The Ambassador of the Argentine Republic, His Excellency Mr Fausto Mariano López Crozet graduated as a lawyer in 1989 before joining the Ministry of Foreign Affairs in 1993. He is a former Director General of his country’s Directorate of Antarctic Affairs and has been involved with many programmes and activities relating to Antarctic issues on his country’s behalf. Mr Crozet is based in Wellington.

The Ambassador of the Republic of the Philippines, His Excellency Mr Jesus S. Domingo has a Master of Laws in International Armed Conflict and a Ph.D in Criminology. He has held postings to the United Nations and to Saudi Arabia. Mr Domingo is based in Wellington.

The Ambassador of Hungary, His Excellency Mr László Zsolt Szábo has combined a career in the media and business with work for his country’s Ministry of Foreign Affairs and Trade. He has a Ph.D in Economics from the Budapest University of Economics. Mr Szabo is based in Canberra.

The Ambassador of the Republic of Guinea, His Excellency Mr Senkoun Sylla has worked for his country’s Ministry of Foreign Affairs since 1996. Before taking on the role of Ambassador to New Zealand, he had been based at the Guinea Embassy in China since 2003, holding a number of positions, most recently Counselor. Mr Sylla is based in Tokyo.

The Ambassador of the Republic of Zimbabwe, His Excellency Mr George Tsaurai Mudzviti Vengesa has a Masters in International Relations and joined the Ministry of Foreign Affairs in 1980. He has held postings in Senegal, France and Libya and also served at the United Nations. Mr Vengesa is based in Canberra