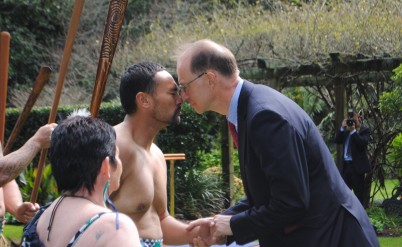 To view more images from the ceremonies, click here

The ceremony, which will include a Māori ceremonial challenge, and a military guard of honour provided by the Royal New Zealand Navy, begins at 11am.

The Ambassador for Germany, HE Dr Anne-Marie Schleich, holds a PhD in Political Science from the University of Mannheim.  Dr Schleich has held positions with German embassies in Singapore, Bangkok, Islamabad and London and prior to her appointment to New Zealand, was Germany’s Consul General in Melbourne.  Dr Schleich is based in Wellington.

The Ambassador for Afghanistan is HE Mr Nasir Ahmad Andisha.  Prior to his appointment as Ambassador to New Zealand, he was the Director General of the Fifth Political Division from 2009 to 2011 at the Afghan Ministry of Foreign Affairs and from 2006 to 2007 he was the Director of Multilateral Economic Relations and International Financial Institutions.  He is based in Canberra.

The Ambassador for Austria, HE Dr Helmut Boeck, is a career diplomat and holds a Doctor of Laws degree from the University of Innsbruck.  Prior to his appointment to New Zealand, he had served in Dakar, New York, Warsaw and Hong Kong, including as Austria’s Permanent Representative to the United Nations.   Dr Boeck is based in Canberra.

The Ambassador for Denmark, HE Mr Borge Petersen, is a career diplomat.   He has served in Jeddah, Los Angeles, Taipei, and Kuala Lumpur and Jakarta.  Mr Petersen is based in Canberra.