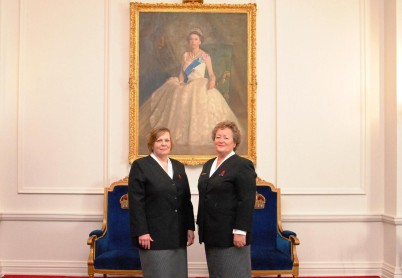 Frances McCaffery and Marion Wortley, Principal Household Attendants at Government House in Wellington, are to receive the Royal Victorian Medal at an investiture ceremony at Palace of Holyroodhouse in Edinburgh in July.   The honours were included in the British New Year’s Honours list and have recently been gazetted in London.

The Royal Victorian Medal was established by Queen Victoria in 1896 and is associated with the Royal Victorian Order.  It is an honour that lies in the Queen’s personal gift, and is not subject to recommendation from the Government.   It is awarded in recognition of extraordinary or important personal services rendered to the Queen and members of the Royal Family.   While other New Zealanders have received the award in the past, it is believed that this is the first time a New Zealander has received the award outside of a context of a Royal visit.

Both Mrs McCaffery and Mrs Wortley began work at Government House in the early 1980s during the term of Governor-General, Sir David Beattie (1980-5).   They have met The Queen on several of her visits to New Zealand, as well as numerous members of the Royal Family and countless Heads of State and other dignitaries who have visited or stayed at Government House.   Both received personal gifts from HRH The Prince of Wales and HRH The Duchess of Cornwall at the end of last year’s Royal Tour to mark the Queen’s Diamond Jubilee.

As Principal Attendants, Mrs McCaffery and Mrs Wortley are senior members of the Household Team and report to the Household Manager.  Mrs McCaffery is responsible for housekeeping at Government House Wellington while Mrs Wortley is responsible for setting up and serving food and beverages at events, including selecting and buying all the wines served in Government House Wellington.

“These awards are well deserved.  Frances and Marion have been stalwart members of the Government House Team for 30 years.   They have embodied our commitment to providing the gold standard in service to the Governor-General and to anyone who visits Government House, whether it is The Queen or a Head of State making an official visit to New Zealand or teenager receiving their Gold Award at a Duke of Edinburgh’s Hillary Programme award ceremony.”

Both Mrs McCaffery and Mrs Wortley chose to receive their awards in Scotland.  Mrs McCaffery was planning a trip to the United Kingdom when the award was announced while Mrs Wortley is from Northern Ireland and her husband is from Scotland and so the trip is also an opportunity to catch up with family and friends in Britain.  They are travelling at their own cost.