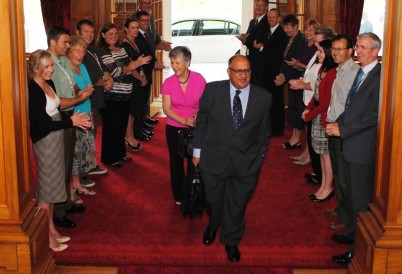 In one of their first official engagements in the restored, strengthened and refurbished House, Their Excellencies will tomorrow receive the Prime Minister of Australia, Hon Julia Gillard.

Maarten Wevers, Chief Executive of the Department of the Prime Minister and Cabinet, said that Government House would be formally reopened by the Governor-General at a ceremony attended by the Prime Minister, Rt Hon John Key, on 24 March 2011.

Mr Wevers advised that the conservation project was within budget and would be completed several months ahead of schedule.

“I am particularly pleased that the Governor-General and Lady Susan have been able to return to the House earlier than we had anticipated, and several months before their term ends in August this year.”

The House, which celebrated its centenary last year, was closed in October 2008.  The project was scheduled to be completed in August this year.

Mr Wevers expressed his thanks to the lead contractor, LT McGuinness Ltd, Athfield Architects and all the associated subcontractors, suppliers, and professional firms and their staff for their commitment to the successful completion of the project.

“This important heritage project, costing more than $40 million, is not only set to be completed ahead of schedule and within budget, but to a very high standard.  The quality of work in the completed House is a credit to all of those involved.”

Details of the reopening events, including public open days,  and opportunities for the media, will be released in the near future.

Government House in Wellington was built between 1908 and 1910 and the first Governor to live in the residence was Lord Islington (1910-12).  The House is an example of a range of buildings designed by the Public Works Department in the Edwardian period, and has been accorded Category 1 status by the New Zealand Historic Places Trust.  As well as being the home and office of the Governor-General, it is also a venue for important events, including State Welcomes for visiting Heads of State, investiture and credentials ceremonies and the swearing in of new governments.  It also plays a key role as a place where Their Excellencies engage with a wide range of community organisations.

The Conservation Project involved earthquake strengthening, removal and replacement of the roof and the stucco panels, removal of asbestos, repainting to better match the original colour scheme, improved disabled access with lifts to all levels, and  the replacement or upgrading of the water, wastewater, stormwater, power, gas, communication, heating, lighting and fire protection systems.