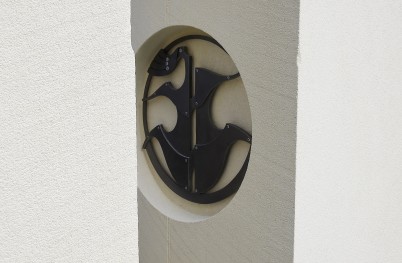 An inaugural Māori and Pasifika arts residency, a legacy of Lt Gen The Rt Hon Sir Jerry Mateparae’s tenure as Governor General, will be marked by the installation of a distinctive sculpture at Massey University.

The sculpture, comprising two slabs carved from Oamaru stone, is officially unveiled by Sir Jerry at a function on the Wellington campus today (6/7/16).

It was carved by the inaugural recipient of the residency, retired Professor of Art and Design at Massey’s College of Creative Arts, Ross Hemera, and celebrates his Ngāi Tahu and South Island whakapapa. The unveiling function also includes the announcement of the sculpture’s name, which was chosen by Professor Hemera.

“We (Ngāi Tahu) say this stone is our ancestor, so to work with it is very important to me. The carvings relate to the whakapapa of the stone itself and the Ngāi Tahu narratives of creation and discovery,” he says.

His sculpture, with a combined weight of five tonnes, is only minutes walk from the four-bedroom cottage in the grounds of Government House, where the residency is based.

A spokesperson for Government House says as the Governor General nears the end of his five year term, he wanted to establish a legacy project and offered the opportunity to Massey University’s College of Creative Arts.

He was particularly pleased that the Massey residency will offer hands-on support to the arts and showcase Māori and Pasifika art.

“Sir Jerry has always been interested in the arts and he wanted to do something practical for the arts. The availability of a house in the grounds of Government House and the fact that Massey is in the same neighbourhood was serendipitous,” she says.

Massey University will provide a stipend to the artist in residence, as well as studio space at the College of Creative Arts.

Project manager for the residency, Sue Elliott, says extensive research was done to ascertain the best way to make use of the opportunity. “We found there were few residencies in New Zealand for Māori and Pasifika artists. Most of the residencies seemed to focus on sending these artists to international destinations,” she says.

There will be three residencies per year: one for Māori artists and one for Pasifika artists. The third residency will be a special projects season, which will provide a range of opportunities including cross college collaborations, a Massey alumni residency or an opportunity for visiting Māori and Pasifika academics.

The residency will be open to Māori and Pasifika artists from throughout New Zealand, with recommendations for the next recipient going to the new Governor General, Dame Patsy Reddy in September this year.